If a self-driving car has an accident, who is at fault? Who is responsible for the impact that artificial intelligence has on society? How can we ensure that our devices don’t inherit our own biases? As the use of AI has grown rapidly in the last few years, so has concern for standards of ethics and accountability in intelligent computing. At the same time, AI is limited by an inherent inability to integrate “context” information and can be strongly influenced by both implicit and explicit bias, and these are major concerns in the medical field, and beyond.

Through a series of thought experiments and case studies from the Trolley Problem and autonomous cars to robotic doctors, investigate real-world ethical problems faced by both clinical institutions and even major corporations like Mercedes Benz. Learn some of the technical logic that underlies AI learning, and of both sources and implications of bias in AI engineering. Practice presentation skills and critical thinking by leading the class debates, where they will present both arguments and counterarguments to the ethical issues at hand. Collaborate with peers to create a “Code of Ethical Engineering” based off of your research. Guest speakers will also join in an effort to delve deeper into the worlds of ethics & technology.

From entities as large as Google to the virtual assistant you have in your home, artificial intelligence has become a part of our everyday lives. Learn more about the roles we play in crafting this new world around us while experiencing one of the premier collegiate programs in the country! 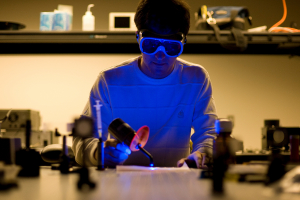