Did you know that empires endured for more than two millennia before finally giving way to the world of nation-states we take for granted? The most recent nation-state is scarcely sixty years old! Empires played a long and critical role in human history and maintained a diversity of people, both conquered and incorporated. For some, foreign conquest meant greater cultural and commercial opportunity and the widening of mental horizons. For others, it meant the limiting of freedoms and increased human suffering. In the Americas and the Pacific, it led to the elimination of entire peoples. Empires have compelled political controversies, innovations, conflicts and aspirations well into the twenty-first century. Explore how practices of imperialism continue to shape our world.

Investigate the political and cultural assumptions and practices of empire in different eras and continents around the world: from ancient Athens to imperial Rome, the Mongolian Steppes to the British colonies, to the failed Nazi attempt at empire and the United States since 9/11. Learn from Duke University History and Political Science scholars and other experts. Analyze artifacts of empire at the Nasher Museum of Art at Duke University!

Determine how imperial rule was imposed and maintained and scrutinize the cultural mores and beliefs that justified the spread and maintenance of empires. Synthesize and apply what you learn during a final mock debate where you argue and adjudicate competing claims related to a contemporary, real-world example! 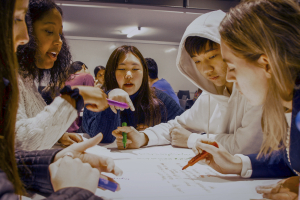